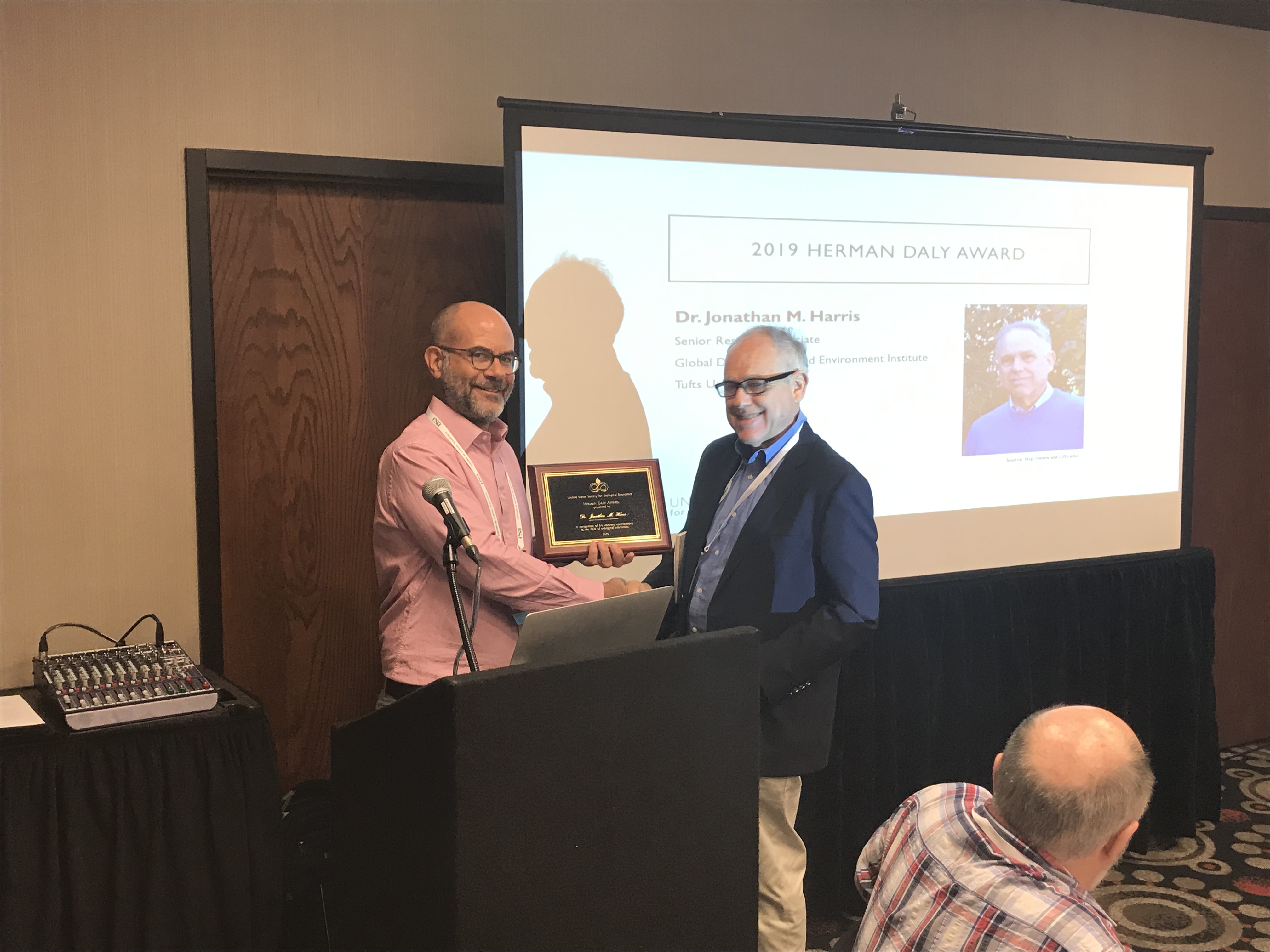 The USSEE is excited to announce our 2019 award recipients: Jonathan Harris of Tufts University for the Herman Daly Award, and Mahadev Bhat of Floridan International University for the Bernado Aguilar Award. Dr. Harris and Dr. Bhat were presented with their awards by USSEE president Robert Richardson at the member luncheon of the 10th biennial conference on Wednesday August 14th.

This award is given in honor of Herman Daly, one of the visionaries who founded the field of ecological economics. The award is designed to recognize individuals who have connected ecological economic thinking to practical applications and implementation of solutions that are sustainable in scale, equitable in distribution and efficient in allocation. An ad-hoc Awards committee, composed of USSEE Board members, convenes prior to the biennial conference, no later than February of the conference year. The committee actively seeks nominations for the award, researches the candidates, and makes a recommendation to the USSEE board as a whole. The board then votes on the award. The award is given in conjunction with the US Society for Ecological Economics biennial conference.

Jonathan Harris is a Senior Research Associate with the Global Development and Environment Institute at Tufts University. Dr. Harris is co-author of Environmental and Natural Resource Economics: A Contemporary Approach (4th ed., Routledge, 2018) and of Macroeconomics in Context, Principles of Economics in Context, and Microeconomics in Context (Routledge, 2019), author of “Green Keynesianism: Beyond Standard Growth Paradigms” in Building a Green Economy: Perspectives from Ecological Economics (Robert Richardson ed., MSU Press 2013); co-editor of Twenty-First Century Macroeconomics: Responding to the Climate Challenge (Edward Elgar, 2009), New Thinking in Macroeconomics: Social and Institutional Perspectives (Edward Elgar, 2003), and of the Frontier Issues in Economic Thought volumes A Survey of Sustainable Development, A Survey of Ecological Economics, and Human Well-Being and Economic Goals. He is also editor of Rethinking Sustainability: Power, Knowledge, and Institutions; author of World Agriculture and the Environment; and co-author of environmental teaching modules on climate change, renewable energy, and environmental issues in macroeconomics. He has served as President of the United States Society for Ecological Economics, and as Adjunct Associate Professor of International Economics at Tufts University’s Fletcher School of Law and Diplomacy.

This award is given in honor of Bernardo Aguilar, a longtime member of ISEE and USSEE, a current member of the ISEE Board, and a former member of the USSEE Board. The Bernardo Aguilar Award was established in 2007 and is given to a person nominated and selected by students. The award was created to recognize a professional who has inspired students through teaching, research, ideas, and/or mentoring in ecological economics.

Dr. Mahadev Bhat is Professor of Natural Resource Economics in the Departments of Earth and Environment and Economics at Florida International University (FIU). Dr. Bhat’s research focuses economic and policy issues relating to natural resources management, including sustainable development, agriculture, water, coastal and marine resources, and ecosystem services valuation. He has more than 250 research articles, book chapters, publications and presentations. He has received research funding from the U.S. Department of Agriculture (USDA), National Science Foundation, National Parks Service, National Oceanic and Atmospheric Administration, and private foundations. Dr. Bhat has advised more than 30 graduate students and 150 undergraduate students on their research and independent study projects. He co-founded the FIU Agroecology Program with the aid of over 20 different USDA grant programs, which helped train over 400 under-represented students in agricultural and natural resources sciences and prepare them for career and higher education. His USDA-funded grants helped establish a multi-university consortium for training over 150 Hispanic students in South Florida and Puerto Rico. Dr. Bhat co-established the FIU Organic Garden, which serves as a teaching tool in urban and sustainable agriculture. The Garden was designated as a People’s Garden by USDA for having promoted sustainable agriculture education and benefited the FIU student community.