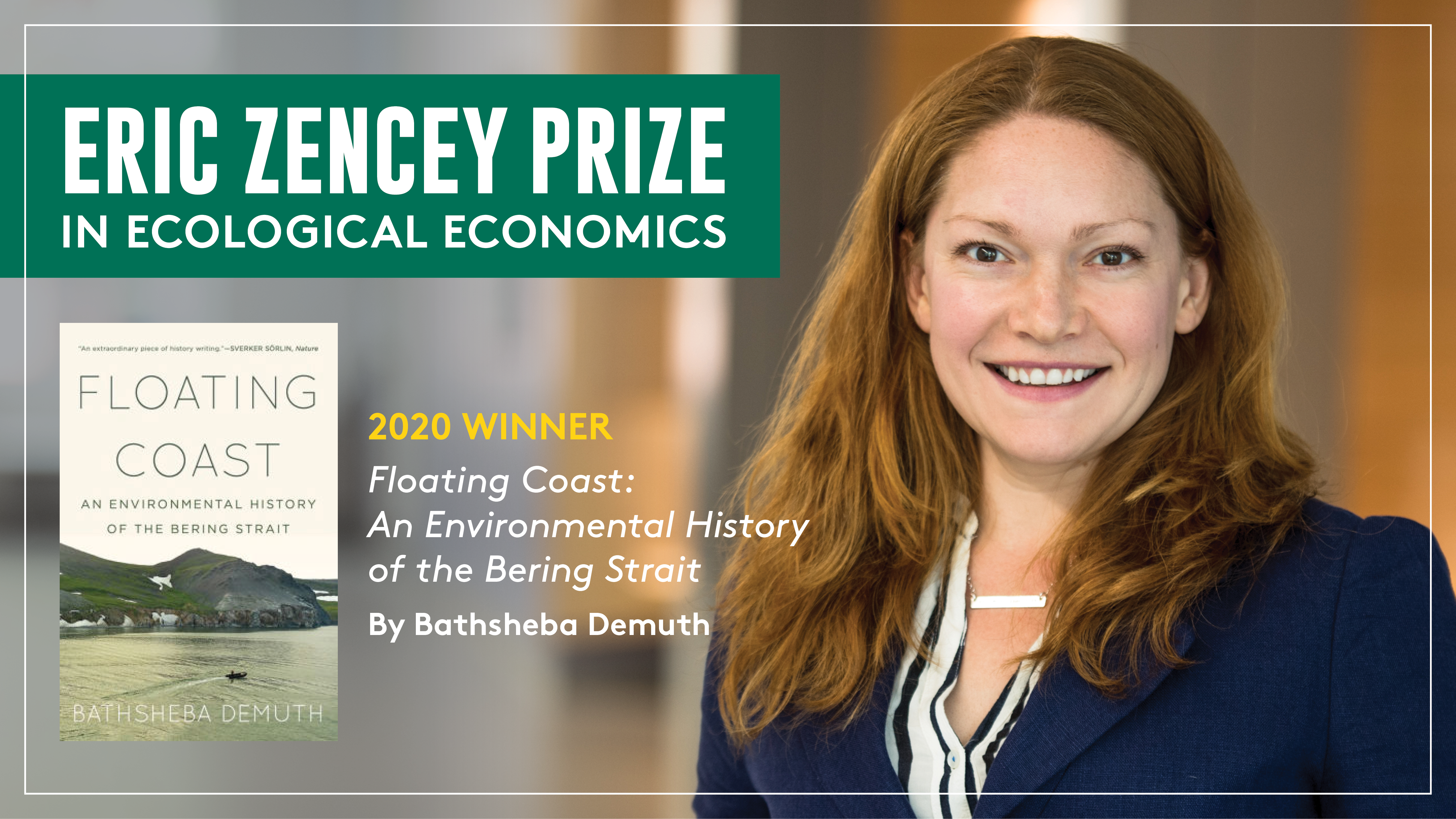 The prize, which celebrates outstanding writing on the environmental limits of a finite planet, is awarded to the book Floating Coast: An Environmental History of the Bering Strait by Bathsheba Demuth of Brown University.

Floating Coast is the first-ever comprehensive history of Beringia, the Arctic land and waters between Russia and Canada, exploring the relationship between capitalism, communism, Arctic ecology, and indigenous peoples over 200 years.

“Floating Coast was the unanimous choice of our judges because it brings the core principles of Ecological Economics to life through an important, timely subject and vivid, compelling writing,” said Taylor Ricketts, Director of the Gund Institute for Environment. “This fine historyof the Arctic, one of our most imperiled environments, is a perfectselection for the inaugural Zencey Prize.”

Named after pioneering scholar Eric Zencey (1954-2019), the Eric Zencey Prize in Ecological Economics was created in 2018 to recognize the best current affairs book or long-form journalism that advances public understanding of real-world environmental challenges using the principles of ecological economics, a field that explores the relationship between economics and Earth’s limited natural resources.

“Eric Zencey was a model of how to bring complex, important environmental concerns to a wide audience,” said Bathsheba Demuth, an environmental historian who lived with indigenous people in the region, and drew from archival sources, while writing Floating Coast. “It is humbling and inspiring to be awarded this prize in his memory, and I hope to carry on his tradition.”

Demuth is an Assistant Professor of History & Environment and Society at Brown University and a Fellow of the Institute at Brown for Environment and Society, specializing in the United States and Russia, and in the history of energy and past climates. She has lived in and studied Arctic communities across Europe, Asia and North America.

Floating Coast is published by W.W. Norton and Co.

A virtual award ceremony and public book club event with Bathsheba Demuth will be co-presented by UVM’s Gund Institute for Environment and the U.S. Society of Ecological Economics on March 10 from 1-2:30 pm Eastern. Register for the Zoom event.

The Zencey Prize includes a $4,000 prize, which is expected to grow over time through philanthropy.

The Eric Zencey Prize in Ecological Economics is awarded every two years. The next call for submissions will be announced in Fall 2021.

Give to the memory of Eric Zencey.

As a writer, thinker, teacher, and public intellectual, Eric Zencey (1954-2019) worked to bring ecological economics – a system for understanding the political, economic, social, and environmental challenges facing our civilization – out of the academy. The Zencey Prize in Ecological Economics honors that work and encourages others to continue it.

Born in Delaware and holding a PhD in political philosophy and the history of science, Zencey made substantial contributions to understanding the biophysical foundations of the economy during his career at the University of Vermont and Washington University in St. Louis. He believed that infinite economic growth is impossible on a finite planet, because the laws of thermodynamics apply to economic systems.

Zencey is author of four books, including The Other Road to Serfdom and the Path to Sustainable Democracy (UPNE); Greening Vermont: Towards a Sustainable State (with Elizabeth Courtney); and Virgin Forest (U of Georgia Press), a collection of essays on history, ecology, and culture. His first book was the internationally best-selling novel and New York Times Notable Book of the Year, Panama. His writing has appeared in media outlets ranging from The New York Times and the Chronicle of Higher Education to Adbusters.

Zencey has received fellowships from the Guggenheim Foundation, the Rockefeller-Bellagio Foundation, and the Bogliasco Foundation.

In Vermont and Missouri, Zencey has been a pioneer in the compilation of and advocacy for the Genuine Progress Indicator (GPI), a more comprehensive measure of economic, social, and environmental health than GDP. His efforts led directly to Vermont becoming one of the first states in the nation to adopt GPI measurement.

Zencey’s affiliations at UVM included the Gund Institute, the Political Science Dept., the Honors College, the Center for Research on Vermont, and the Center for Rural Studies. At Washington University, his appointments included teaching and research positions in the College of Architecture and Urban Planning at the Sam Fox School for Design and Visual Art. Zencey also served as chair of the online history department at SUNY Empire State College, and taught in the college’s international programs, chiefly in Prague.